A View from across the Atlantic

This latest post comes from an old and faithful friend of Boggioli, Brett Donham. Brett is an architect, and he and his wife Priscilla live on an old and beautiful property in rural Maine.

Brett raises two important issues, both of which can be related to our situation in Tuscany. Here many small hill farms, unprofitable and often primitive, were gradually abandoned in the 1960s and 1970s and the forest moved in. (Tuscany is Italy’s most forested region, though not the largest.) Some farmhouses have been restored and often used as second homes, but actual  hill farming has been greatly reduced. The main beneficiary  of this of course is our local wildlife which has increased in numbers dramatically in the last few years.

The other issue highlighted by Brett is the growing concern about where our food comes from and how it is produced. We in this part of Tuscany now have several farmers’ markets, one of them permanent, and the term ‘organic’ is now widely accepted as a basic criterion for choosing which products to buy. It still means that you can buy fruit in particular out of season, but you don’t have to have if local suppliers can offer you a locally produced alternative. And you can always grow your own!

No Farms No Food

As you drive through rural northern New England you see on older model cars and pickup trucks bumper stickers that say NO FARMS NO FOOD. Two hundred years ago New England was 90% cleared land for field crops, orchards, pastureland or hay and 10% forested land. Now the ratio is reversed; 5% farmed or pastureland, 5% urbanized development and 90% forested land. Stone walls demarking former cultivated fields and pastures and now wandering off into second-growth forests are vivid testimony to this. Abandoned farmland is being converted to second homes or “camps” and low-intensity commercial development. Much is just reverting to a thick impenetrable tangle of forest; with New England’s abundant rainfall an abandoned field is unrecoverable in 15 to 20 years.
In the 1970s a nascent “back-to-the-land” movement tried to reverse this trend but it petered out. The unexpected hard physical labor, lack of access to markets, the inability to afford health care and save for retirement, and the constant capital expense drove many of them to a more predictable lifestyle. More recently, in the last 20 years or so, a new wave of “back-to-the-landers” has appeared on the scene, at least in the part of rural Maine we live in. For those for whom really fresh food, the aesthetics of open worked farmland, and the human fellowship of farmers’ markets are important, this is good news indeed.
So what has changed to encourage this second wave of new farmers? One is the nationwide growth of interest in healthy food. Many restaurants now list on their menus the source of their meats and vegetables with emphasis on local farms. Another is the explosion in the number and availability of farmer’s markets. In our immediate area there is at least one farmer’s market every day of the week in warm weather and two a week all year round. Favorable tax policies have helped. By placing a permanent farmland easement on property in some jurisdictions the assessed value of the land and thereby annual taxes can be reduced. And finally, charitable organizations have been created to help. The Maine Farmland Trust , for example, being a non-profit is qualified to accept farmland easements on farm property, thereby reducing the value for inheritance and land taxes and making purchase by new young farmers easier. They arrange farming apprenticeships so new young farmers can learn the trade.
Awareness of our carbon footprint and our individual responsibility to reduce it play a role here too. Fresh raspberries in January taste terrific until you think about the carbon cost of flying them 4,000 miles to mid-coast Maine. Local apples and root vegetables are available all year round in New England and always have been.

Tell me about it!

It’s hard to imagine that there are still some people who remain unconvinced that the weather is changing. On a global level we see images of devastating fires and hurricanes and melting ice caps, but the changes are also felt at the local level – at least, at our local level.

Our summers are longer, hotter and drier. Fortunately in the autumn and winter the water table and the aquifers are normally replenished by periods of heavy, almost violent rain, storms, hail – you name it. In 2020 for instance we did not see a frost until late November, almost unheard of. And during this past winter we have had only two short spells of really cold weather but a lot of rain.

This means that we have seen some unusual events. For example, our late-fruiting raspberries were giving us delicious fruit in mid-November, and we had roses out in January!

Also in November I saw a praying mantis, an insect that we normally see in September, perhaps in October. I wondered if it was a relative of the spindly creature that I saw on the windowsill of my office in the spring. It was almost transparent, and I eventually identified it as a mantis nymph.

What does all this mean for our olives? Fortunately the olive tree is very resilient. It will survive periods of extreme heat and cold, but each variety has its own limits. The trees there may be damaged and need reshaping, but in a few years they will again be productive. As the climate warms we may have to consider planting varieties now grown in southern Italy or North Africa that are more resistant to heat and drought.

It was reported recently that some farmers in Apulia are already experimenting with growing avocados, bananas and even mangoes. Perhaps that is what the long-term future holds for us too.

A Solution in Sight

Two days ago I read that the Italian Constitutional Court had given the go- ahead for killing wild boar. The reasons it gave were that wild boar can be a danger to humans, cause serious traffic accidents, destroy crops and spread disease.

The boar are definitely a nuisance and are increasing alarmingly in numbers. When I first came to this area in 1975 for several years I never even saw a boar. As their numbers increased we became accustomed in the autumn to the cries of the boar hunters and the barking and squealing of their dogs. Apparently wild boar from Hungary were introduced into Tuscany after the war and, as there were no natural predators then (wolves arrived much later), they multiplied rapidly. There are signs of them everywhere as they dig up the fields, erode the banks and block the ditches. They are usually not dangerous except when defending their young, but you have to be wary when you walk in the woods in the early morning or at dusk.

This news was strangely very topical because just two days before this announcement our Maremmana, Alba, was gored by a boar defending its young. This happened quite unexpectedly in the late afternoon while Alba and her companions Emi and Siria were being taken on a walk in the woods,. Alba is usually very savvy when it comes to confronting boar, so she must have been ambushed or taken by surprise when she chased one of the very young boars into the undergrowth.

The gash under her left shoulder was long but not deep. We luckily found a vet who was working on a Saturday evening and had the wound stitched up. It all went just fine, but now she has to take antibiotics for five days and wear an uncomfortable collar. Fortunately she is a very good patient.

All in a day’s work when you live in the country.

HAPPY, PROSPEROUS AND – ABOVE ALL – HEALTHY

There has been a break in communication owing to the fact that we were involved in the olive harvest. This year has been particularly good crop, and we are very pleased.

We are happy to have a post written by Robin Ellis, whose recent book Mediterranean Vegetarian Cooking (already reprinted – terrific!) was featured a few weeks ago. He and his wife Meredith have visited us several times during the olive harvest, and this is his recollection of one of their visits.

Today is the first day of the olive harvest at Boggioli high in the Tuscan Hills and we are guests here to help–in principal! We are awoken by a faint chugger-chugger of a tractor engine–it’s 7.40am and daylight is struggling to establish itself. The tractor and its trailer are driven by Peter who will work tirelessly with the other four pickers for the next 10 days–depending on the weather–to strip the farm’s thousand-plus trees of their beautiful purple-green olives and transport them to the frantoio (the olive mill) to be processed miraculously into green gold liquid: olive oil!

The team of five works a long day. From eight in the morning until five as the daylight fades, with an hour for a snack lunch. They work at the trees with long electric rakes, lifting them high and stroking lightly downwards through the branches to bring the olives tumbling through the leaves onto the wide supple nets spread out on the ground. Each man carries a battery on his back, that powers the rake. It’s tough, steady work.

When a tree has yielded all its treasure, the nets beneath are carefully drawn together in a motion that guides the little runaway olives into piles. These piles are then distributed between colourful plastic crates, full of vents to keep the fruit aerated. These crates are then transported to the mill the next day. 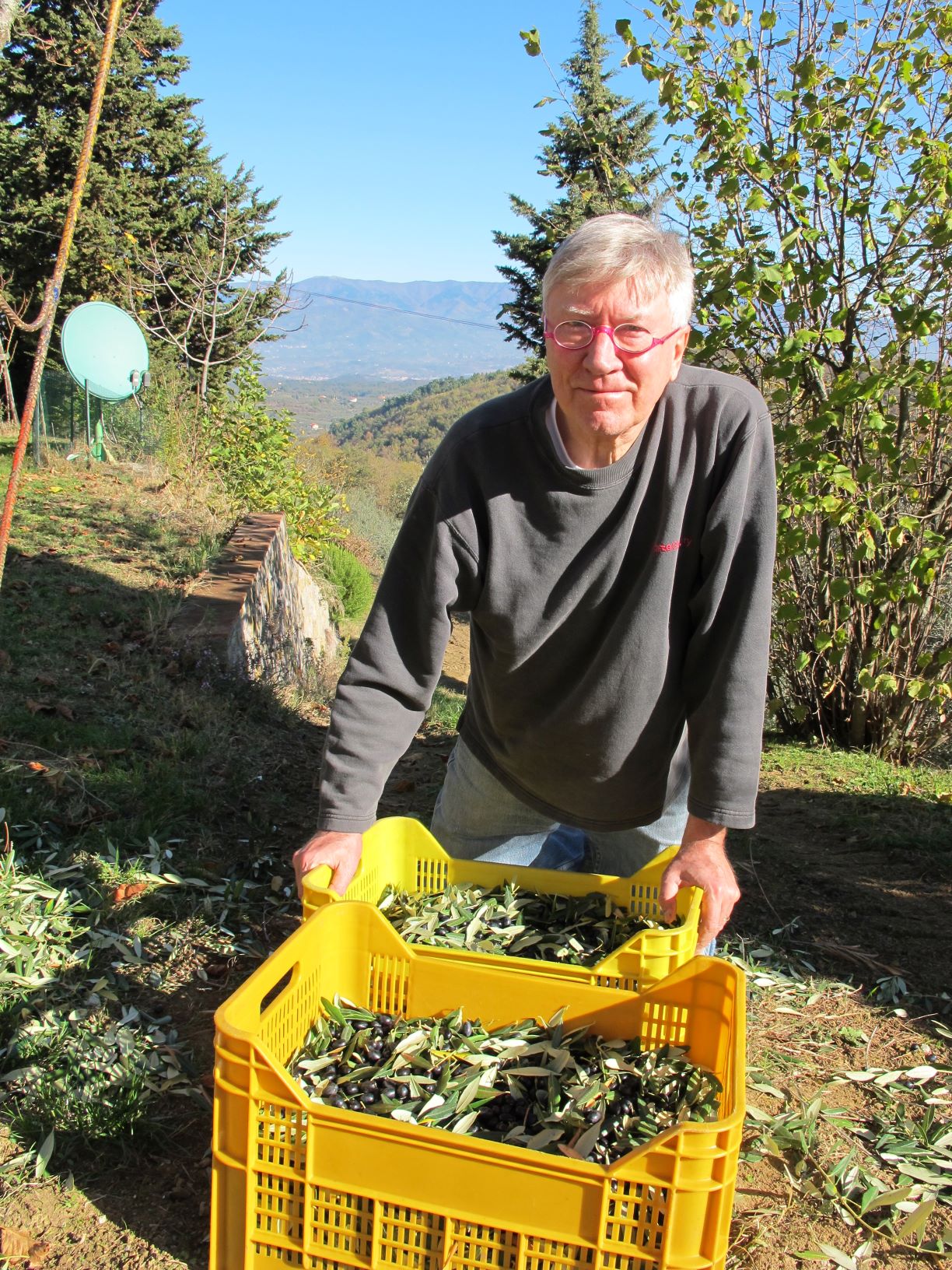 Driving through the olive groves that stretch away down the valley you still see more traditional methods in use with wooden ladders pitched against the trees and families harvesting their precious fruit by hand.

Ah yes, our job is to sort the debris of leaves and small branches from the olives while avoiding stepping on and squashing them. Not so arduous but a useful part of the day’s work, we tell ourselves.

Thank you, Robin. And so the oil is now safely stored in our stainless steel containers and protected by nitrogen to prevent oxidation, the end of the process. Time to start selling it!