The oil produced from olives grown at Boggioli is a classic, genuine Tuscan oil, robust and spicy, with the slightly piquant note associated with the oils of this region.
Because of its chemical and sensory characteristics Boggioli olive oil is classified as ‘extra virgin’.
This recognition is based on its low acidity (well below the official limit of 0.8%) and on the results of a legally-binding panel test conducted by registered oil tasters.

Also, Boggioli oil is certified as 100% organic and usually meets the criteria to be classified as Toscano IGP – Colline di Arezzo. 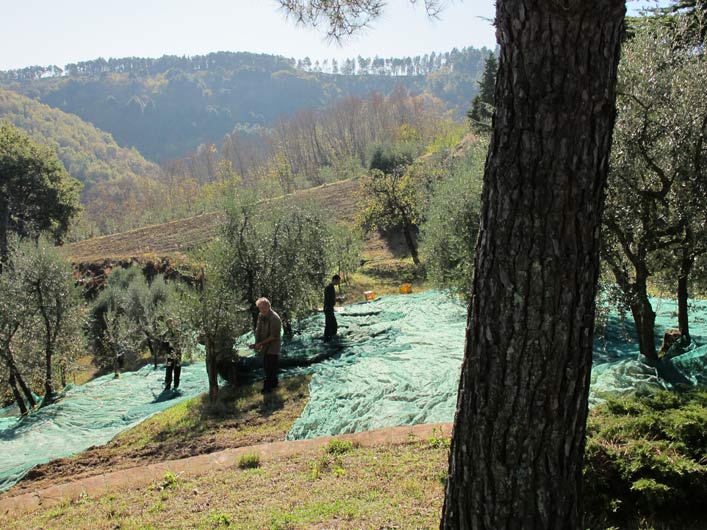 The fruit is picked in the first two weeks of November, although sometimes we start as early as the end of October, depending on the maturation of the fruit. Olives picked earlier rather than later tend to produce an oil that maintains its essential characteristics longer; an early harvest also reduces the risk of damage to the olives from bad weather. The harvesting is carried out basically by hand, with the fruit being combed down onto long nets spread beneath the trees. For the past few harvests, though, we have supplemented this with electrically-powered equipment that enhances the speed of picking and eliminates the need for ladders. 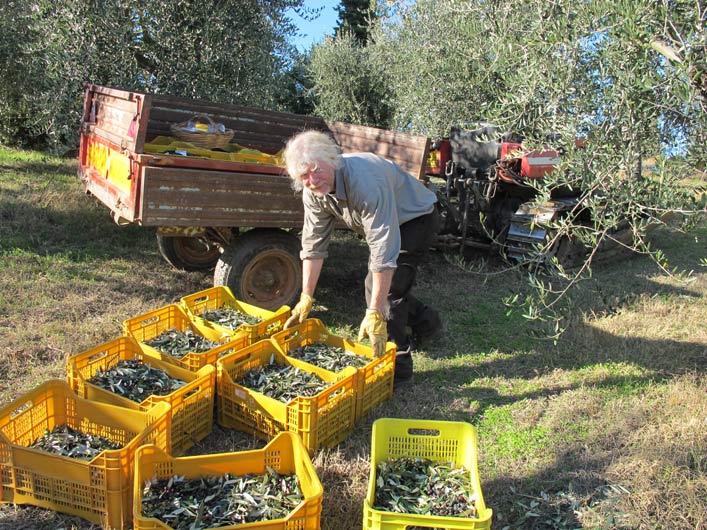 Ideally olives should be processed on the same day as they are picked, so that they are as fresh and free from defects (fermentation, mould etc) as possible. That is not always feasible on a small farm such as ours, so we have adopted a workable compromise by storing our olives in aerated crates and taking them every second day. 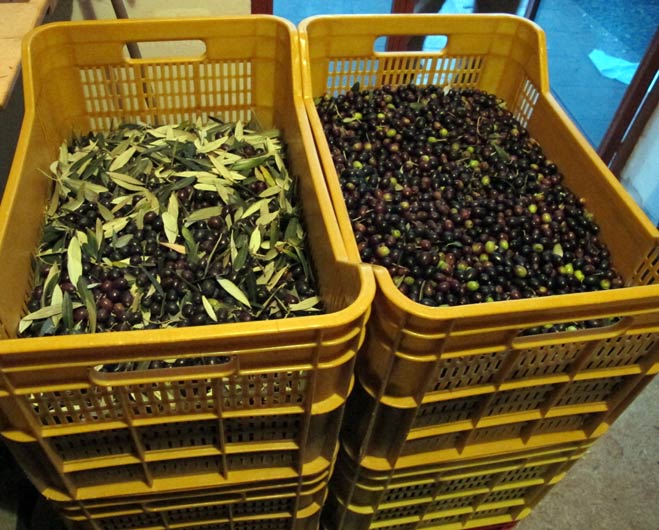 From the nets the olives go straight into plastic crates, each holding about 20 kg and perforated to allow air to circulate, which are weighed and stacked ready for transport to the extraction plant. The fruit is thus kept in dry, aerated conditions right up to the moment it is processed into oil. This is very important for maintaining the quality of the final product, because lengthy and incorrect storage can cause fermentation and other damage to the fruit before it is processed. 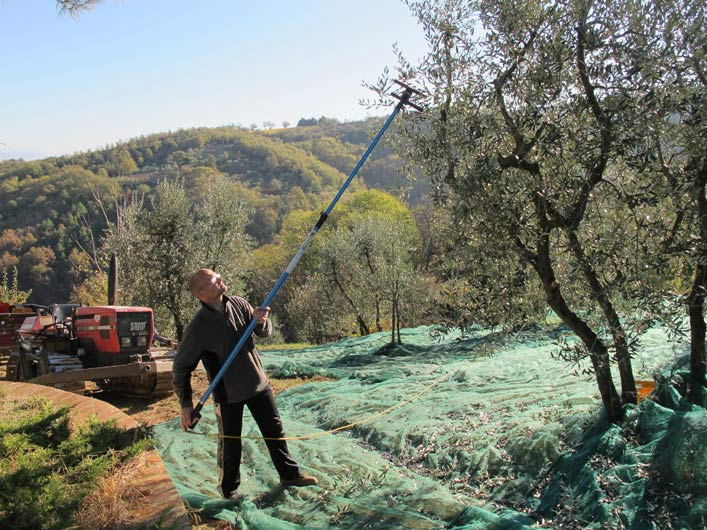 One of the most drastic changes since we started producing olive oil occurred at the olive mill or frantoio, where the traditional grinding stones and presses, unhygienic and labour-intensive at the best of times, gave way to modern centrifuges, a continuous system that is faster and more economical to run. 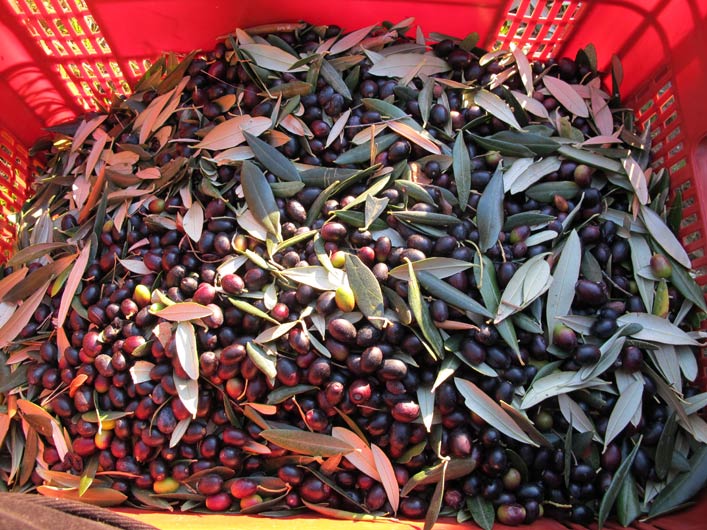 Storage after processing is also crucial. Gone are the days of terracotta vases or orcie, glazed on the inside and usually scoured out with vinegar, which were not only easily cracked but also difficult to clean and to free from any undesirable odours (olive oil being particularly susceptible to these). Nowadays we use stainless steel containers that can hold several hundred litres. Here the wine industry has had an influence; on many large farms the space between the oil’s surface and the top of the container is filled with nitrogen to prevent contact with the air, oxygen being the enemy of oil as well as of wine. In our case, we use floaters on the surface of the oil to minimise the risk of oxidation.

The same risk is faced at the bottling stage, the solution being to use bottles with UV-resistant glass. This means that oil is sold in dark bottles, so you can only enjoy the colour when the oil is poured. It is important, though, to keep olive oil out of strong light, as it will change colour and eventually lose some of its chemical characteristics. Beware therefore of buying green oil in a clear bottle; after a few days in such a bottle green oil should have become yellow or golden. If it has not, then there is something at work that is not pure extra virgin oil! Cans, of course, offer this protection (and are lighter and safer to ship), but they do not quite have the same allure as a bottle. 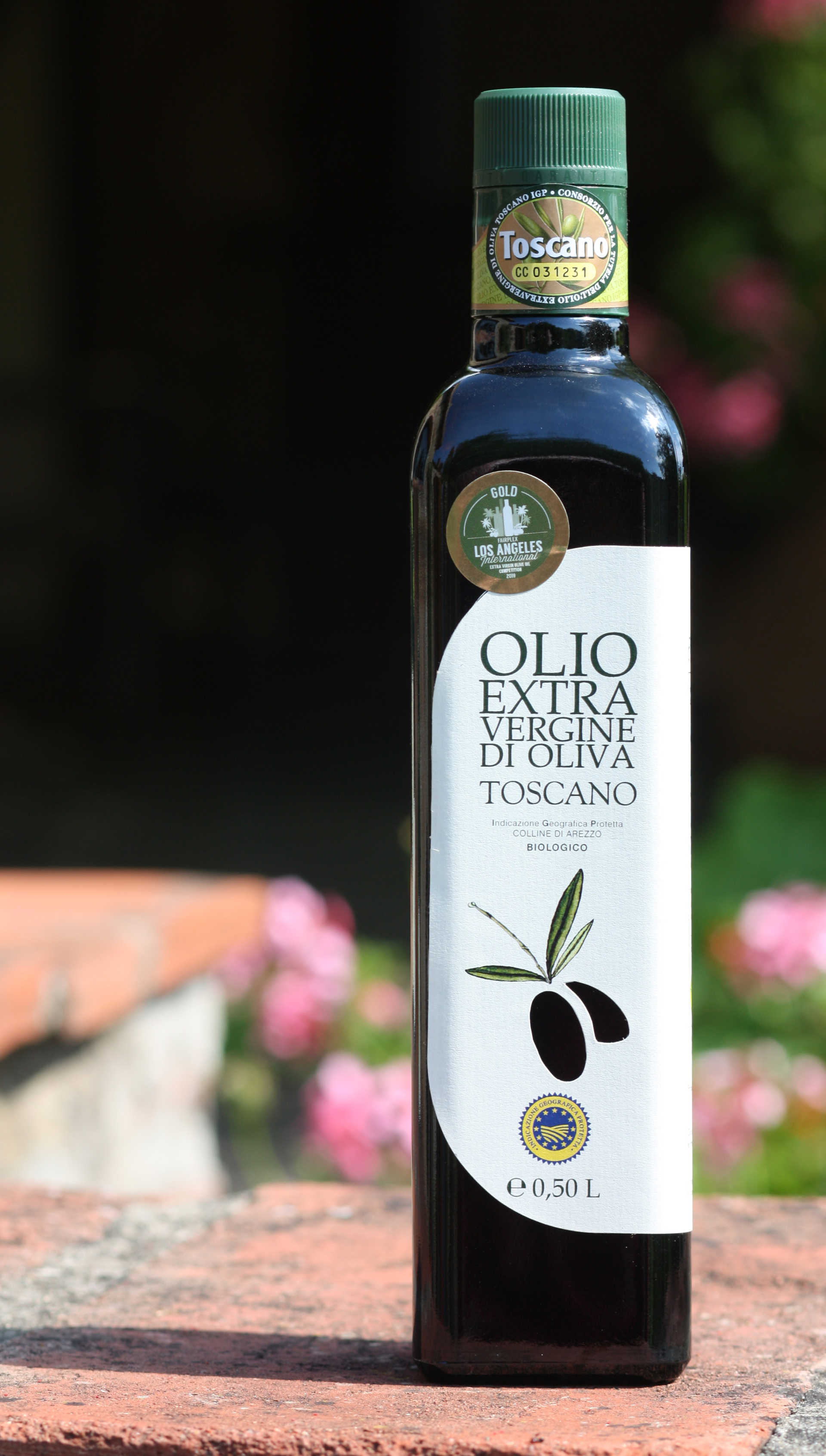 Several local restaurants have used Boggioli olive oil, Osteria del Borro in San Giustino Valdarno (Frazione Borro) the Osteria L’Oca Satolla in Laterina, our oil is also served at the Osteria Le Panzanelle in Lucarelli near Radda-in-Chianti and at the Osteria Il Papavero in Barbischio, near Gaiole in Chianti and the restaurant/winery Papposileno in Cavriglia. 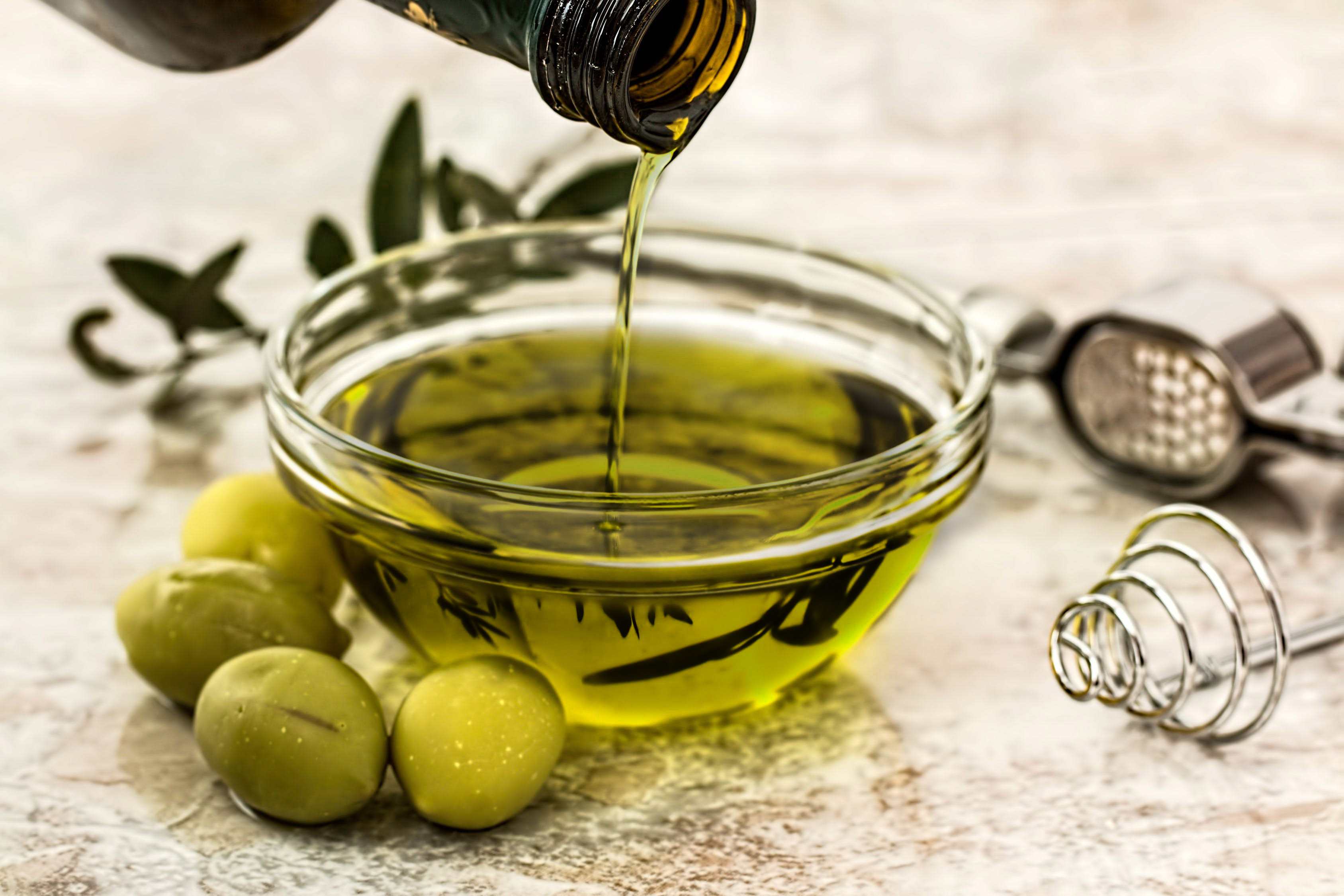 Over the last twenty years or so our oil has won several important prizes at the local, national and international level, which is a great source of satisfaction for a small enterprise like ours. It was quite a thrill in 2002 when we learned that we had won second prize in a national competition at Festambiente, an annual event (run by one of Italy’s main environmental organizations, Legambiente). Two years later we won a first prize there, and our oil has been recognized for its excellence by Festambiente in subsequent years.

As mentioned in one of our blogs, we won a Gold Medal at the Los Angeles International Olive Oil Competition for our 2012 oil. After Silver Medals in 2014 and 2018 we won another Gold Medal in 2019. In 2013 we received one of 12 prizes awarded by Der Feinschmecker (a kind of German Gourmet Magazine) and were one of six finalists in the competition for Toscano IGP – Colline di Arezzo extra virgin olive oils organized by the Province of Arezzo.

In 2007 we were awarded first prize in the inaugural international competition, Olio Capitale, organized by the Fair of Trieste, and we have a very handsome marble plaque to prove it. We have also done well locally, the latest award being second prize in December 2017 at the annual competition run by our comune, Cavriglia.

In 2018 our oil was awarded third prize in  an international olive oil competition organized by the Associazione Interregionale Produttori Olivicoli in Verona, and in 2019 we won first prize in an international competition in Arpino south of Rome. The actual prize in this last case was a roof tile with a hand-painted view of a street in Arpino: very original.

Finally, our oil is mentioned regularly in such annual publications as the Slow Food Guida agli Extravergini and the bilingual (Italian and English) L’Extravergine edited by Marco Oreggia. Likewise, two prestigious German-language periodicals have rated Boggioli olive oil amongst the best in Italy. There have also been articles about or mentions of Boggioli oil in Corriere della Sera, de Vinis, Cucina e Vini and La Cucina Italiana.